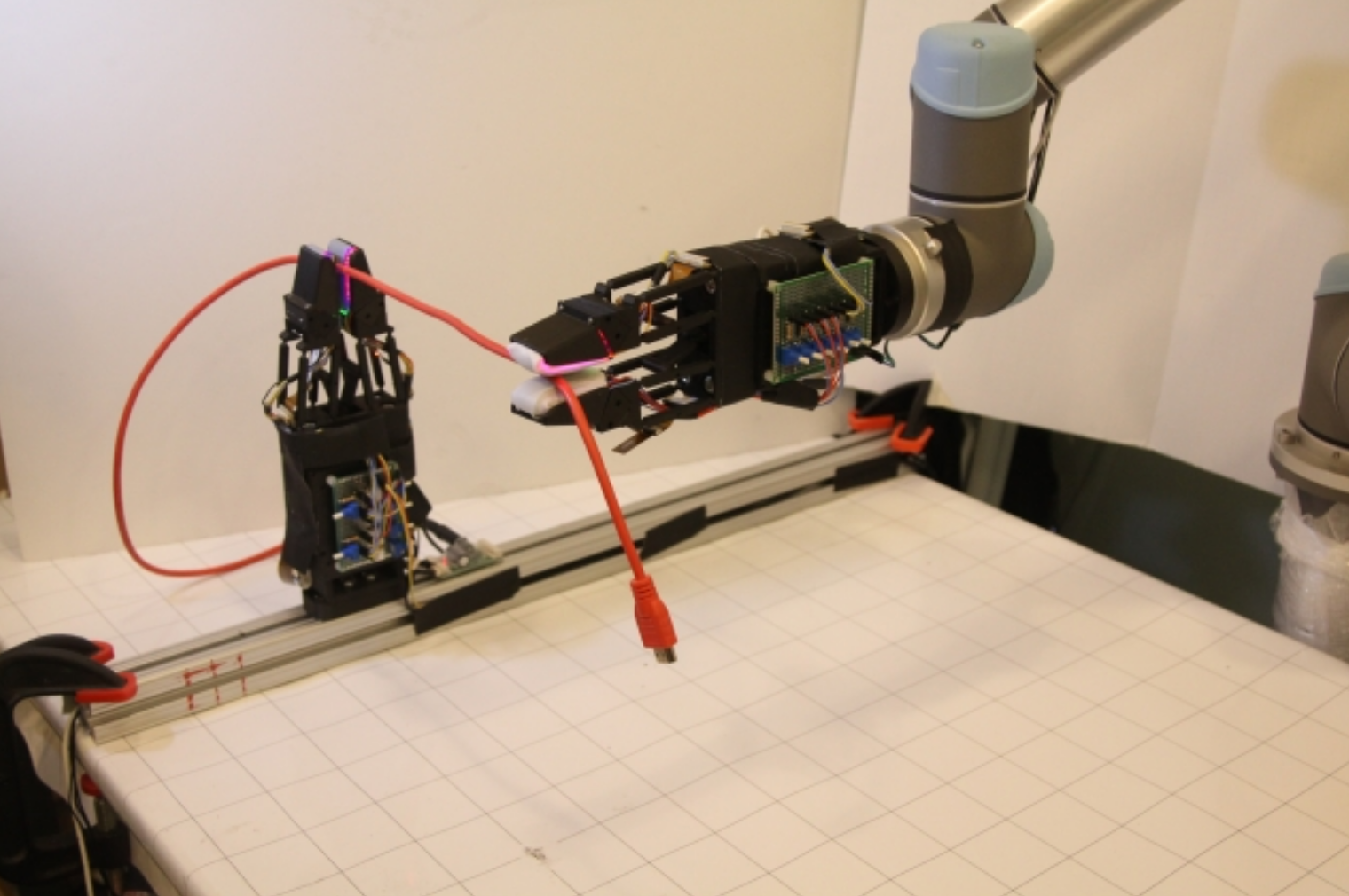 For humans, it can be challenging to manipulate thin flexible objects like ropes, wires, or cables. But if these problems are hard for humans, they are nearly impossible for robots. As a cable slides between the fingers, its shape is constantly changing, and the robot’s fingers must be constantly sensing and adjusting the cable’s position and motion.

Standard approaches have used a series of slow and incremental deformations, as well as mechanical fixtures, to get the job done. Recently, a group of researchers from MIT’s Computer Science and Artificial Intelligence Laboratory (CSAIL) and from the Mechanical Engineering Department (MechE) pursued the task from a different angle, in a manner that more closely mimics us humans. The team’s new system uses a pair of soft robotic grippers with high-resolution tactile sensors (and no added mechanical constraints) to successfully manipulate freely moving cables.

One could imagine using a system like this for both industrial and household tasks, to one day enable robots to help us with things like tying knots, wire shaping, or even surgical suturing.

The team’s first step was to build a novel two-fingered gripper. The opposing fingers are lightweight and quick moving, allowing nimble, real-time adjustments of force and position. On the tips of the fingers are vision-based “GelSight” sensors, built from soft rubber with embedded cameras. The gripper is mounted on a robot arm, which can move as part of the control system.

The team’s second step was to create a perception-and-control framework to allow cable manipulation. For perception, they used the GelSight sensors to estimate the pose of the cable between the fingers, and to measure the frictional forces as the cable slides. Two controllers run in parallel: one modulates grip strength, while the other adjusts the gripper pose to keep the cable within the gripper.

When mounted on the arm, the gripper could reliably follow a USB cable starting from a random grasp position. Then, in combination with a second gripper, the robot can move the cable “hand over hand” (as a human would) in order to find the end of the cable. It could also adapt to cables of different materials and thicknesses.

As a further demo of its prowess, the robot performed an action that humans routinely do when plugging earbuds into a cell phone. Starting with a free-floating earbud cable, the robot was able to slide the cable between its fingers, stop when it felt the plug touch its fingers, adjust the plug’s pose, and finally insert the plug into the jack.

“Manipulating soft objects is so common in our daily lives, like cable manipulation, cloth folding, and string knotting,” says Yu She, MIT postdoc and lead author on a new paper about the system. “In many cases, we would like to have robots help humans do this kind of work, especially when the tasks are repetitive, dull, or unsafe.”

Cable following is challenging for two reasons. First, it requires controlling the “grasp force” (to enable smooth sliding), and the “grasp pose” (to prevent the cable from falling from the gripper’s fingers).

This information is hard to capture from conventional vision systems during continuous manipulation, because it’s usually occluded, expensive to interpret, and sometimes inaccurate.

What’s more, this information can’t be directly observed with just vision sensors, hence the team’s use of tactile sensors. The gripper’s joints are also flexible — protecting them from potential impact.

The algorithms can also be generalized to different cables with various physical properties like material, stiffness, and diameter, and also to those at different speeds.

When comparing different controllers applied to the team’s gripper, their control policy could retain the cable in hand for longer distances than three others. For example, the “open-loop” controller only followed 36 percent of the total length, the gripper easily lost the cable when it curved, and it needed many regrasps to finish the task.

The team observed that it was difﬁcult to pull the cable back when it reached the edge of the ﬁnger, because of the convex surface of the GelSight sensor. Therefore, they hope to improve the ﬁnger-sensor shape to enhance the overall performance.

This work was supported by the Amazon Research Awards (ARA), the Toyota Research Institute (TRI), and the Office of Naval Research (ONR).