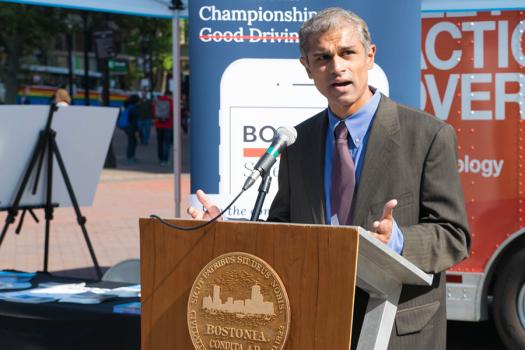 Boston’s roads may be getting a little safer, thanks to drivers’ mobile phones. Traditionally one of the biggest sources of driver distraction, a new competition from the city of Boston is putting mobile phones to work to measure and improve users’ driving.

CSAIL spin-off Cambridge Mobile Telematics launched "Boston’s Safest Driver Competition," aimed at improving Boston’s drivers with help from an app they developed, that gives feedback on how safely you're driving.

Announced by Mayor Martin J. Walsh on Monday, the competition will use a smartphone app to score drivers on behaviors associated with safer driving. Drivers who have the safest records will be eligible for prizes throughout the competition, which runs through December 3.

The competition marks the first time that a city has turned to the emerging technology of telematics — apps and hardware that measure driving behavior— Walsh said at the event in Copley Square.

“We are looking at new technology...and we’re working to educate road users on how to maximize safety.” Walsh said. “I think that’s one of the biggest things we can do is to make sure we educate all people. That’s the area where innovation can help us, and we can even have some fun with it.”

The Boston’s Safest Driver app will provide feedback to drivers on five areas associated with risky driving: rapid acceleration, harsh breaking, sharp turns, at-risk speeding, and phone distraction. The app runs on a smartphone’s background, and scores are penalized if a driver uses their phone while they’re driving.

For Cambridge Mobile Telematics CTO Hari Balakrishnan, the competition is a welcome way to focus on making Boston’s roads safer.

“Given our national and global footprint it is extremely gratifying and important for us at Cambridge Mobile Telematics to focus on our home city,” said Balakrishnan, who is also the Fujitsu Professor of Electrical Engineering and Computer Science.

Started in 2010 by Balakrishnan and fellow MIT Professor of Electrical Engineering and Computer Science Samuel Madden, the Boston-based company has deployed their DriveWell Program in numerous safe-driving apps and programs in countries across the world.

DriveWell uses a smartphone’s sensors, such as accelerometers, gyroscopes, and position sensors to collect data and report back to a driver on their driving, Balakrishnan explained. Under the program, distracted driving can drop by 35 percent or more across all users within a month, he said.

The competition is the result of a partnership between Cambridge Mobile Telematics, the Arbella Insurance Foundation, and the city of Boston’s Vision Zero Task Force, which aims to eliminate fatal and serious traffic crashes in the city by 2030.