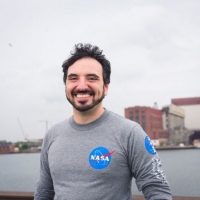 Falco is a Postdoctoral Associate at MIT's Computer Science and Artificial Intelligence Laboratory where he works on cyber/physical, embedded system cybersecurity with Dr. Howard Shrobe. His research focuses on urban critical infrastructure such as the electric grid, water networks and transportation systems that have been digitized as part of the emergent Smart City. Falco specializes on applying the latest AI Planning, Machine Learning and Blockchain technology to cybersecurity issues around IoT and IIoT. He completed his PhD in Cybersecurity at MIT's CSAIL.

Falco and Shrobe are collaborating with NASA's Jet Propulsion Laboratory (JPL) to develop a "Master Attack Planner" that can enumerate all possible attack vectors for any type of system using the latest thinking in cyber science. The planner can be used as a cybersecurity auditing tool for organizations seeking to understand how hackers will break into their systems. NASA JPL will be piloting the attack planner on a space mission system as an extension of Falco's PhD, which was funded in part by NASA JPL. Falco and Shrobe have received an NSF Eager Grant for their pioneering work in cyber/physical system, IIoT cybersecurity as well as grants from The Internet Policy Research Initiative (IPRI) on urban critical infrastructure security.

He is an Adjunct Professor at Columbia University where he teaches classes in Computer Science, Smart Cities/Sustainability, IoT and Big Data. Falco also works as a Postdoctoral Scholar at Stanford at the Center for International Security and Cooperation (CISAC) where he researchers and teaches Cyber Risk. He completed his pre-doctoral fellowship at Harvard's Belfer Center as a Cyber Research Fellow where he still facilitates a course on Cyber Risk Management. Prior to his PhD, Falco was an executive at Accenture where he co-founded and led their Smart City Strategy business.

Falco is an inventor and has developed several start-up ventures. His security startup, NeuroMesh, secures IoT technology using hacker tools, the bitcoin blockchain and machine learning. It is currently being piloted with a major utility in Europe and the US. He also co-founded a platform to scale investment in R&D which is being piloted by MIT CSAIL.

He has been a guest speaker for the U.S. Department of Defense, the U.S. Navy, University of Tokyo, Cambridge University and presented at the opening bell of the Toronto Stock Exchange. His interests and expertise are highly interdisciplinary and he enjoys working on transformative, disruptive technologies.He is always looking for new collaborations and open to speaking opportunities.