What better wind-speed prediction can do for the energy industry 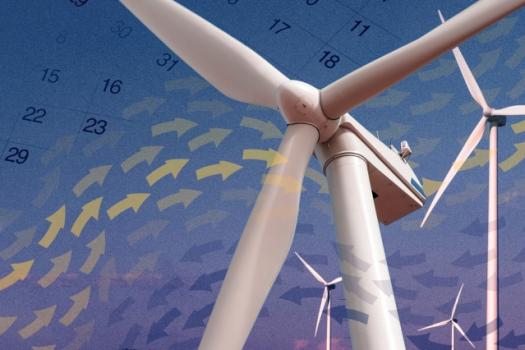 When a power company wants to build a new wind farm, it generally hires a consultant to make wind speed measurements at the proposed site for eight to 12 months. Those measurements are correlated with historical data and used to assess the site’s power-generation capacity.

This month CSAIL researchers will present a new statistical technique that yields better wind-speed predictions than existing techniques do — even when it uses only three months’ worth of data. That could save power companies time and money, particularly in the evaluation of sites for offshore wind farms, where maintaining measurement stations is particularly costly.

“We talked with people in the wind industry, and we found that they were using a very, very simplistic mechanism to estimate the wind resource at a site,” says Kalyan Veeramachaneni, a CSAIL research scientist and first author on the new paper. In particular, Veeramachaneni says, standard practice in the industry is to model correlations in wind-speed data using a so-called Gaussian distribution — the “bell curve” familiar from basic statistics.

“The data here is non-Gaussian; we all know that,” Veeramachaneni says. “You can fit a bell curve to it, but that’s not an accurate representation of the data.”

Typically, a wind energy consultant will find correlations between wind speed measurements at a proposed site and those made, during the same period, at a nearby weather station where records stretch back for decades. On the basis of those correlations, the consultant will adjust the weather station’s historical data to provide an approximation of wind speeds at the new site.

More on the paper being presented at the International Joint Conference on Artificial Intelligence": https://newsoffice.mit.edu/2015/siting-wind-farms-quickly-cheaply-0717