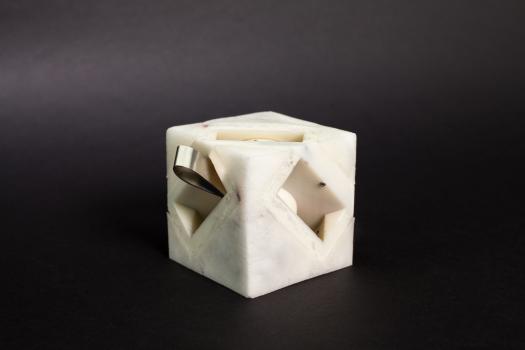 Researchers from MIT’s Computer Science and Artificial Intelligence Lab have developed a soft robotic cube that uses a series of spring-loaded metal tongues to jump, bounce and roll along rocky terrain.

The three-inch-wide, seven-ounce cube is able to jump more than a two-and-half times its height (upwards of eight inches vertically). Take that, Blake Griffin!

The team believes that future versions could carry light-weight cameras that would make them useful for exploration and surveillance. They also intend to find ways to create more power that would allow the cubes to jump even higher and farther.

Inside of the cube there are two motorized rotors that are each connected to one end of four flattened “tongues” (loops of spring steel). Activating the rotors causes the tongues to get pulled through rectangular openings into a round cavity inside the body of the robot. As the rotors continue to turn, the tongues keep getting more and more compressed, eventually getting pulled all the way around back to the openings. This causes them to spring out, simultaneously releasing a bundle of elastic energy that spurs the robot to jump.

The team originally tested a “hard version” of the robot, but found that the softer one could double its distance by bouncing along flat surfaces after landing. The cubes are totally  self-contained, with integrated sensors, controllers, and rechargeable batteries.

The cube design was outlined in a paper at this month’s IEEE/RSJ International Conference on Intelligent Robots and Systems (IROS). The work was done by CSAIL PhD student Robert Katzschmann, postdoc Shuguang Li, and CSAIL Director Daniela Rus, the Viterbi Professor of Electrical Engineering and Computer Science.