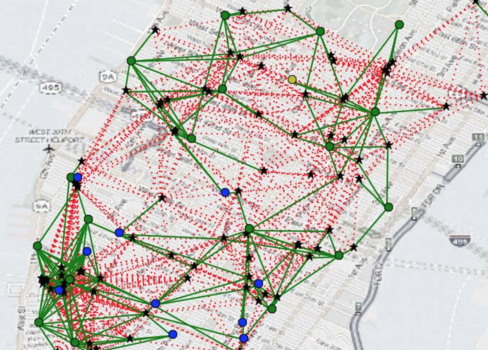 Traffic is not just a nuisance for drivers: it’s also a public-health hazard and bad news for the economy.

Transportation studies put the annual cost of congestion at $160 billion, which includes 7 billion hours of time lost to sitting in traffic and an extra 3 billion gallons of fuel burned.

One way to improve traffic is through ride-sharing - and a new MIT study suggests that using carpooling options from companies like Uber and Lyft could reduce the number of taxis on the road 75 percent without significantly impacting travel time.

Led by Professor Daniela Rus of MIT’s Computer Science and Artificial Intelligence Laboratory (CSAIL), researchers developed an algorithm that found that 3,000 four-passenger cars could serve 98 percent of taxi demand in New York City, with an average wait-time of only 2.7 minutes.

“Instead of transporting people one at a time, drivers could transport two to four people at once, results in fewer trips, in less time, to make the same amount of money,” says Rus, who wrote a related paper with former CSAIL postdoc Javier Alonso-Mora, assistant professor Samitha Samaranayake of Cornell University, PhD student Alex Wallar and MIT professor Emilio Frazzoli. “A system like this could allow drivers to work shorter shifts, while also creating less traffic, cleaner air and shorter, less stressful commutes.”

The team also found that 95 percent of demand would be covered by just 2,000 ten-person vehicles, compared to the nearly 14,000 taxis that currently operate in New York City.

Using data from 3 million taxi rides, the new algorithm works in real-time to reroute cars based on incoming requests, and can also proactively send idle cars to areas with high demand - a step that speeds up service 20 percent, according to Rus.

“To our knowledge, this is the first time that scientists have been able to experimentally quantify the trade-off between fleet size, capacity, waiting time, travel delay, and operational costs for a range of vehicles, from taxis to vans and shuttles,” says Rus. “What’s more, the system is particularly suited to autonomous cars, since it can continuously reroute vehicles based on real-time requests.”

The team's article was published in this week’s issue of the Proceedings of the National Academy of the Sciences (PNAS).

A future of carpool tunnels
While the concept of carpooling has been around for decades, it’s only in the last two years that services like Uber and Lyft have leveraged smartphone data in a way that has made ride-sharing a cheap, convenient option. (In 2015 Lyft reported that half of its San Francisco trips were carpools.)

However, existing approaches are still limited in their complexity. For example, some ride-sharing systems require that user B be on the way for user A, and need to have all the requests submitted before they can create a route.

In contrast, the new system allows requests to be rematched to different vehicles. It can also analyze a range of different types of vehicles to determine, say, where or when a 10-person van would be of the greatest benefit.

The system works by first creating a graph of all of the requests and all of the vehicles. It then creates a second graph of all possible trip combinations, and uses a method called “integer linear programming” to compute the best assignment of vehicles to trips.
After cars are assigned, the algorithm can then rebalance the remaining idle vehicles by sending them to higher-demand areas.

“A key challenge was to develop a real-time solution that considers the thousands of vehicles and requests at once,” says Rus. “We can do this in our method because that first step enables us to understand and abstract the road network at a fine level of detail.”

The final product is what Rus calls an “anytime optimal algorithm,” which means that it gets better the more times you run it - and she says that she’s eager to see how much it can improve with further refinement.

“Ride-sharing services have enormous potential for positive societal impact with respect to congestion, pollution and energy consumption,” says Rus. “It’s important that we as researchers do everything we can to explore ways to make these transportation systems as efficient and reliable as possible.”