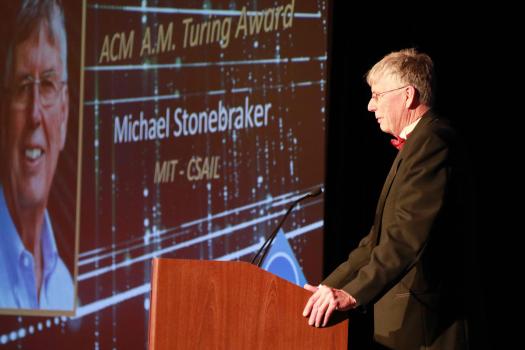 Michael Stonebraker, a CSAIL researcher who has revolutionized the field of database management systems (DBMSs) and founded multiple successful database companies, just accepted the Association for Computing Machinery’s (ACM) A.M. Turing Award, often referred to as “the Nobel Prize of computing.” This year marks the first time that the Turing Award comes with a Google-funded $1 million prize.

ACM said that Stonebraker “invented many of the concepts that are used in almost all modern database systems ... and founded numerous companies successfully commercializing his pioneering database technology work.”

An adjunct professor of computer science and engineering at MIT and a principal investigator at CSAIL, Stonebraker sometimes jokes that he didn’t know what he was researching for more than 30 years. “But then, out of nowhere, some marketing guys started talking about ‘big data,’” he says. “That’s when I realized that I’d been studying this thing for the better part of my academic life.”

Stonebraker's work over the past four decades has helped spur a multibillion-dollar “big data” industry that he himself has participated in, creating and leading nine separate companies, including VoltDB, Tamr, Paradigm4, and Vertica (which was bought by Hewlett-Packard in 2011 for $340 million).

“Mike has been a trailblazer in the field of databases by asking the essential questions about how we collect, organize, and access information in our lives,” says Daniela Rus, director of CSAIL and the Andrew and Erna Viterbi Professor of Electrical Engineering and Computer Science. “He has been both a devoted academic and a serial entrepreneur, and all of us at CSAIL are so inspired by his work and proud to have him as a colleague.”