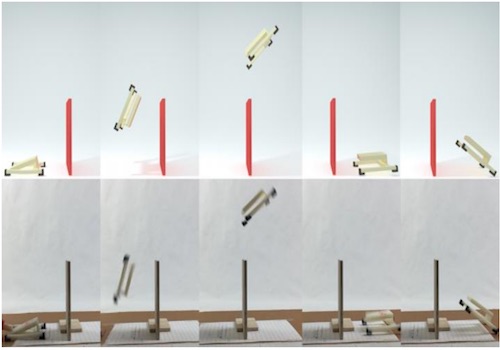 In recent years engineers have been developing new technologies to enable robots and humans to move faster and jump higher. Soft, elastic materials store energy in these devices, which, if released carefully, enable elegant dynamic motions. Robots leap over obstacles and prosthetics empower sprinting. A fundamental challenge remains in developing these technologies. Scientists spend long hours building and testing prototypes that can reliably move in specific ways so that, for example, a robot lands right-side up upon landing a jump.

A pair of new computational methods developed by a team of researchers from Massachusetts Institute of Technology (MIT), University of Toronto and Adobe Research takes first steps towards automating the design of the dynamic mechanisms behind these movements. Their methods generate simulations that match the real-world behaviors of flexible devices at rates 70-times faster than previously possible and provide critical improvements in the accuracy of simulated collisions and rebounds. These methods are then both fast and accurate enough to be used to automate the design process used to create dynamic mechanisms for controlled jumping.

The team will present their methods and results from their paper, "Dynamics-Aware Numerical Coarsening for Fabrication Design," at the SIGGRAPH 2017 conference in Los Angeles, 30 July to 3 August. SIGGRAPH spotlights the most innovative results in computer graphics research and interactive techniques worldwide.

Major advances in computational design, physical modeling and rapid manufacturing have enabled the fabrication of objects with customized physical properties--such as tailored sneakers, complex prosthetics, and soft robots--while computer graphics research has seen rapid improvements and efficiencies in creating compelling animations of physics for games, virtual reality and film. In this new work, the team aims to combine efficiency and accuracy to enable simulation for design fabrication, and to accurately simulate objects in motion.

"The goal is to bring the physical rules of virtual reality much closer to those of actual reality," says Levin.

In the research, the team addresses the challenge with simulating elastic objects as they collide - making things accurate enough to match reality and fast enough to automate that design process. Attempting to create such simulations in the presence of contact, impact or friction remains time-consuming and inaccurate.

"It is very important to get this part right, and, until now, our existing computer codes tend to break down here," says Kaufman. "We realize that if we are doing design for the real world, we have to have code that correctly models things such as high-speed bouncing, collision and friction."

The researchers demonstrate their new methods, Dynamics-Aware Coarsening (DAC) and Boundary Balanced Impact (BBI), by designing and fabricating mechanisms that flip, throw and jump over obstacles. Their methods perform simulations much faster than existing, state-of-the-art approaches and with greater accuracy when compared to real-world motions.

DAC works by reducing degrees of freedom, the number of values that encode motion, to speed up simulations while still capturing important motions for dynamic scenarios. It finds the roughest meshes that can correctly represent the key shapes that will be taken by dynamics and matches the material properties of these meshes directly to recorded video experiment. BBI is a method for modeling impact behavior of elastic objects. It uses material properties to smoothly project velocities near impact sites to model many real world impact situations such as the impact and rebound between a soft printed material and a table, for instance.

The team was inspired by the need for faster, more accurate design tools that can capture accurate simulations of elastic objects undergoing deformation and collision - especially at high-speeds. These new methods could, down the road, be applied to robotics design, developing robots as they increasingly take on human-like movements and characteristics.

"This project is really a first step for us in pushing methods for simulating reality," says Kaufman. "We are focusing on pushing them for automatic design and exploring how to effectively use them in design. We can create beautiful images in computer graphics and in animation, let's extend these methods to actual objects in the real world that are useful, beautiful and efficient."