A smart surface for smart devices 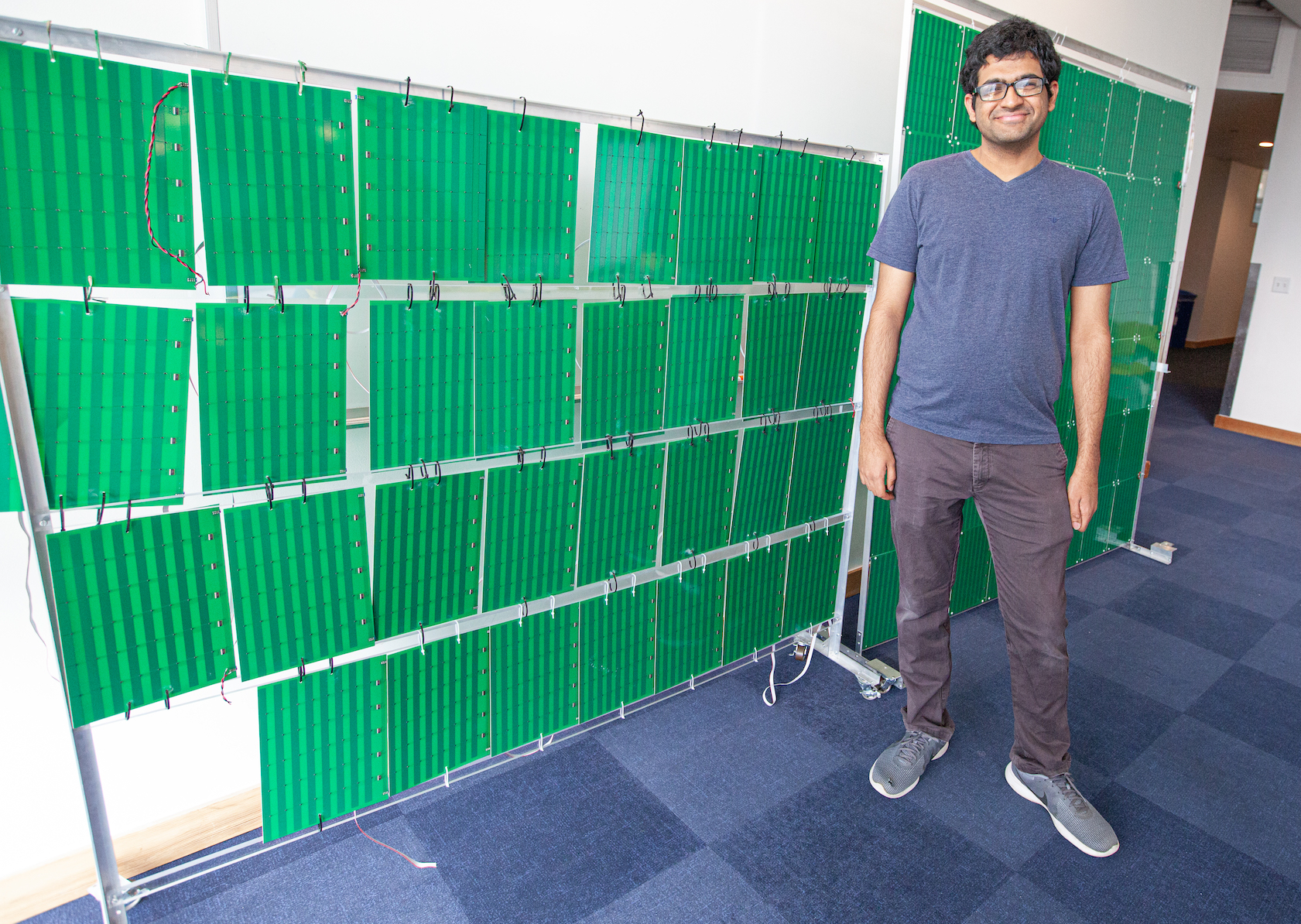 We’ve heard it for years: 5G is coming.

And yet, while high-speed 5G internet has indeed slowly been rolling out in a smattering of countries across the globe, many barriers remain that have prevented widespread adoption.

One issue is that we can’t get faster internet speeds without more efficient ways of delivering wireless signals. The general trend has been to simply add antennas to either the transmitter (i.e., Wi-Fi access points and cell towers) or the receiver (such as a phone or laptop). But that’s grown difficult to do as companies increasingly produce smaller and smaller devices, including a new wave of “internet of things” systems.

Researchers from MIT's Computer Science and Artificial Intelligence Laboratory (CSAIL) looked at the problem recently and wondered if people have had things completely backwards this whole time. Rather than focusing on the transmitters and receivers, what if we could amplify the signal by adding antennas to an external surface in the environment itself?

That’s the idea behind the CSAIL team's new system RFocus, a software-controlled “smart surface” that uses more than 3,000 antennas to maximize the strength of the signal at the receiver. Tests showed that RFocus could improve the average signal strength by a factor of almost 10. Practically speaking, the platform is also very cost-effective, with each antenna costing only a few cents. The antennas are inexpensive because they don’t process the signal at all; they merely control how it is reflected. Lead author Venkat Arun says that the project represents what is, to the team’s knowledge, the largest number of antennas ever used for a single communication link.

While the system could serve as another form of WiFi range extender, the researchers say its most valuable use could be in the network-connected homes and factories of the future.

For example, imagine a warehouse with hundreds of sensors for monitoring machines and inventory. MIT Professor Hari Balakrishnan says that systems for that type of scale would normally be prohibitively expensive and/or power-intensive, but could be possible with a low-power interconnected system that uses an approach like RFocus.

“The core goal here was to explore whether we can use elements in the environment and arrange them to direct the signal in a way that we can actually control,” says Balakrishnan, senior author on a new paper about RFocus that will be presented next month at the USENIX Symposium on Networked Systems Design and Implementation (NSDI) in Santa Clara, California. “If you want to have wireless devices that transmit at the lowest possible power, but give you a good signal, this seems to be one extremely promising way to do it.”

RFocus is a two-dimensional surface composed of thousands of antennas that can each either let the signal through or reflect it. The state of the elements is set by a software controller that the team developed with the goal of maximizing the signal strength at a receiver.

“The biggest challenge was determining how to configure the antennas to maximize signal strength without using any additional sensors, since the signals we measure are very weak,”  says PhD student Venkat Arun, lead author of the new paper alongside Balakrishnan. “We ended up with a technique that is surprisingly robust.”

The researchers aren’t the first to explore the possibility of improving internet speeds using the external environment. A team at Princeton University led by Professor Kyle Jamieson proposed a similar scheme for the specific situation of people using computers on either side of a wall. Balakrishnan says that the goal with RFocus was to develop an even more low-cost approach that could be used in a wider range of scenarios.

“Smart surfaces give us literally thousands of antennas to play around with,” says Jamieson, who was not involved in the RFocus project. “The best way of controlling all these antennas, and navigating the massive search space that results when you imagine all the possible antenna configurations, are just two really challenging open problems.”

Related
RFocus project page
Venkat Arun
Hari Balakrishnan
Department of Electrical Engineering and Computer Science
“The core goal here was to explore whether we can use elements in the environment and arrange them to direct the signal in a way that we can actually control.”