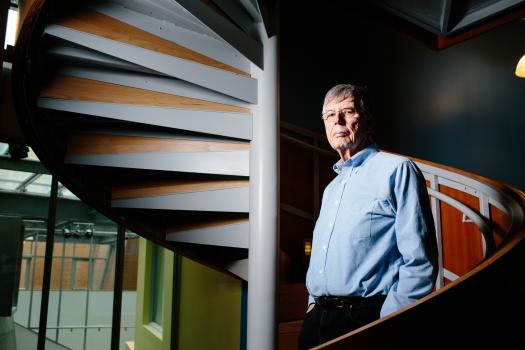 Most entrepreneurs would consider themselves lucky to launch a single company.

A researcher at MIT’s Computer Science and Artificial Intelligence Lab, Stonebraker has founded and led nine different big-data spin-offs, including VoltDB, Tamr and Vertica - the latter of which was bought by Hewlett Packard for $340 million.

Now he’s bringing his insights to a new online course being offered this month through edX and MIT Professional Education. Co-taught by long-time business partner Andy Palmer, “Startup Success: How to Launch a Technology Company in 6 Steps” covers topics ranging from generating ideas and recruiting top talent to pitching VCs and negotiating deals - all in the span of three weeks.

“Converting concepts into companies is a tough, messy process,” says CSAIL Director Daniela Rus. “Mike has always believed strongly that, when it comes to research ideas, the best jury are real-world users, and that’s what this course is all about.”

Stonebraker’s work over the past four decades has helped spur a multi-billion-dollar “big data” industry, inspiring the Boston Globe to describe him as “the tech world's equivalent of Tom Brady” and “an idea guy that it seems silly to bet against.”

Palmer, meanwhile, is an angel investor who has helped found and fund more than 50 companies in technology, health-care and the life sciences, including Bluefin Labs, which was bought by Twitter for a reported $90 million.

“In talking to a lot of entrepreneurs, I’ve learned that they all make the same collections of mistakes over and over again,” says Stonebraker. “When people ask me how to start a company, my answer is always the same: ‘follow these steps and it’ll work.’”

The six steps that Stonebraker and Palmer flesh out in the course are:

1. Have a good idea
2. Assemble a small team and build a prototype
3. Find a business partner
4. Find your customers
5. Pitch the VCs
6. Negotiate a deal

The most important of these, according to Stonebraker, are numbers 1 and 3.

“Without a good idea, you can’t get anywhere,” he says. “And once you have a good idea, you still need to raise money, which means you’ll have to recruit some ‘adult supervision’ to give your company some credibility.”

Stonebraker’s own entrepreneurship education was learning by doing. He started his first company forty years ago, as an assistant professor at UC-Berkeley with a good idea but no MBA.

“Back then we had no idea what we were doing,” he says. “A combination of luck and circumstance led to me finding a guy to run the company, which is what we needed to make a splash.”

He says that the biggest mistake new companies make is spending too much money. “Tech startups fail when they run out of money, and not before,” he says. “Don’t create expensive sales divisions until you’ve consistently been able to sell the product yourself. All too often, ramping up leads to closing down.”

The course, which starts on February 29, spans the technical, financial, managerial and practical aspects of launching a tech company, and also looks at case studies to analyze what works and what doesn’t.