Robots that can recognize objects? A SLAM dunk 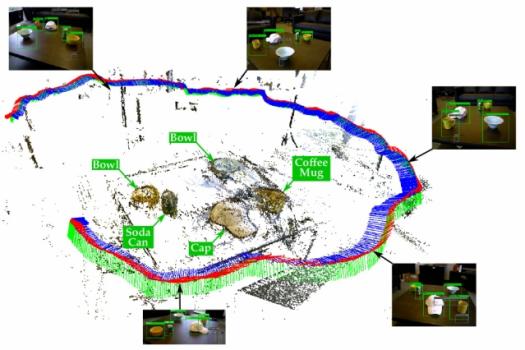 John Leonard’s group at CSAIL specializes in SLAM, or simultaneous localization and mapping, the technique whereby mobile autonomous robots map their environments and determine their locations.

Last week, at the Robotics Science and Systems conference, members of Leonard’s group presented a new paper demonstrating how SLAM can be used to improve object-recognition systems, which will be a vital component of future robots that have to manipulate the objects around them in arbitrary ways.

“Considering object recognition as a black box, and considering SLAM as a black box, how do you integrate them in a nice manner?” asks Sudeep Pillai, a graduate student in computer science and engineering and first author on the new paper. “How do you incorporate probabilities from each viewpoint over time? That’s really what we wanted to achieve.”

Despite working with existing SLAM and object-recognition algorithms, however, and despite using only the output of an ordinary video camera, the system’s performance is already comparable to that of special-purpose robotic object-recognition systems that factor in depth measurements as well as visual information.

And of course, because the system can fuse information captured from different camera angles, it fares much better than object-recognition systems trying to identify objects in still images.