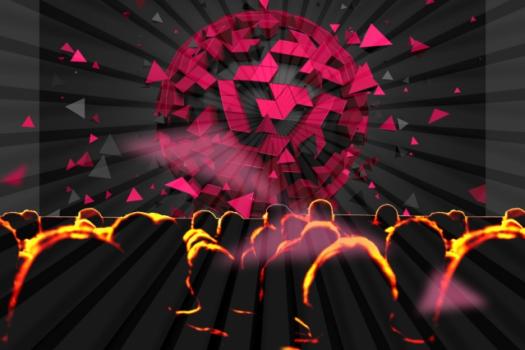 3-D movies immerse us in new worlds and allow us to see places and things in ways that we otherwise couldn’t. But behind every 3-D experience is something that is uniformly despised: those goofy glasses.

Fortunately, there may be hope. In a new paper, a team from MIT’s Computer Science and Artificial Intelligence Lab (CSAIL) and Israel’s Weizmann Institute of Science have demonstrated a display that lets audiences watch 3-D films in a movie theater without extra eyewear.

Dubbed “Cinema 3D,” the prototype uses a special array of lenses and mirrors to enable viewers to watch a 3-D movie from any seat in a theater.

“Existing approaches to glasses-free 3-D require screens whose resolution requirements are so enormous that they are completely impractical,” says MIT professor Wojciech Matusik, one of the co-authors on a related paper whose first author is Weizmann PhD Netalee Efrat. “This is the first technical approach that allows for glasses-free 3-D on a large scale.”

While the researchers caution that the system isn’t currently market-ready, they are optimistic that future versions could push the technology to a place where theaters would be able to offer glasses-free alternatives for 3-D movies.

Among the paper’s co-authors are MIT research technician Mike Foshey; former CSAIL postdoc Piotr Didyk; and two Weizmann researchers that include Efrat and professor Anat Levin. Efrat will present the paper at this week’s SIGGRAPH computer-graphics conference in Anaheim, California.

How it works
Glasses-free 3-D already exists, but not in a way that scales to movie theaters. Traditional methods for TV sets use a series of slits in front of the screen (a “parallax barrier”) that allows each eye to see a different set of pixels, creating a simulated sense of depth.

But because parallax barriers have to be at a consistent distance from the viewer, this approach isn’t practical for larger spaces like theaters that have viewers at different angles and distances.

Other methods, including one from the MIT Media Lab, involve developing completely new physical projectors that cover the entire angular range of the audience. However, this often comes at a cost of lower image-resolution.

The key insight with Cinema 3D is that people in movie theaters move their heads only over a very small range of angles, limited by the width of their seat. Thus, it is enough to display images to a narrow range of angles and replicate that to all seats in the theater.

What Cinema 3D does, then, is encode multiple parallax barriers in one display, such that each viewer sees a parallax barrier tailored to their position. That range of views is then replicated across the theater by a series of mirrors and lenses within Cinema 3D’s special optics system.

“With a 3-D TV, you have to account for people moving around to watch from different angles, which means that you have to divide up a limited number of pixels to be projected so that the viewer sees the image from wherever they are,” says Gordon Wetzstein, an assistant professor of electrical engineering at Stanford University, who was not involved in the research. “The authors [of Cinema 3D] cleverly exploited the fact that theaters have a unique set-up in which every person sits in a more or less fixed position the whole time.”

The team demonstrated that their approach allows viewers from different parts of an auditorium to see images of consistently high resolution.

Cinema 3D isn’t particularly practical at the moment: The team’s prototype requires 50 sets of mirrors and lenses, and yet is just barely larger than a pad of paper. But, in theory, the technology could work in any context in which 3-D visuals would be shown to multiple people at the same time, such as billboards or storefront advertisements. Matusik says that the team hopes to build a larger version of the display and to further refine the optics to continue to improve the image resolution.

“It remains to be seen whether the approach is financially feasible enough to scale up to a full-blown theater,” says Matusik.

“But we are optimistic that this is an important next step in developing glasses-free 3-D for large spaces like movie theaters and auditoriums.”