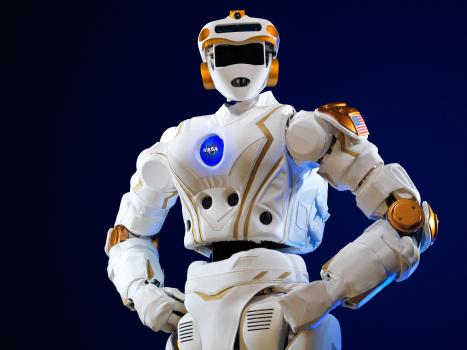 This week NASA announced that MIT’s Computer Science and Artificial Intelligence Laboratory (CSAIL) is one of just two institutions who will receive “R5,” a six-foot, 290-pound humanoid robot also known as “Valkyrie” that will serve on future space missions to Mars and beyond.

A group led by CSAIL principal investigator Russ Tedrake will develop algorithms for the robot as part of NASA’s upcoming Space Robotics Challenge, which aims to create more dexterous autonomous robots that can help or even take the place of humans “extreme space” missions. (NASA’s challenge is divided into a virtual competition using robotic simulations, and a physical competition using the robot.)

Tedrake’s team, which was selected from groups that were entered in this year’s Defense Advanced Research Projects Agency (DARPA) Robotics Challenge, will receive as much as $250,000 a year for two years from NASA’s Space Technology Mission Directive (STMD).

NASA says it is interested in humanoid robots because they can help or even replace astronauts working in extreme space environments. Robots like R5 could be used in future missions either as precursor robots performing mission tasks before humans arrive or as human-assistive robots collaborating with the human crew. While R5 was initially designed to complete disaster-relief maneuvers, its main goal is now to prove itself worthy of even trickier terrain - deep space exploration.

“Advances in robotics, including human-robotic collaboration, are critical to developing the capabilities required for our journey to Mars,” said Steve Jurczyk, associate administrator for the Space Technology Mission Directorate (STMD) at NASA Headquarters in Washington, in a NASA press release. “We are excited to engage these university research groups to help NASA with this next big step in robotics technology development.”

Autonomy for autos, robots and more
As head of CSAIL’s Robot Locomotion Group, Tedrake has extensive experience with autonomous robots. Over the past three years he led a team of more than 20 researchers to develop algorithms for a government competition to get another six-foot-tall humanoid robot named Atlas to open doors, turn valves, drill holes, climb stairs, scramble over cinder blocks, and drive a car - all in the space of one hour.