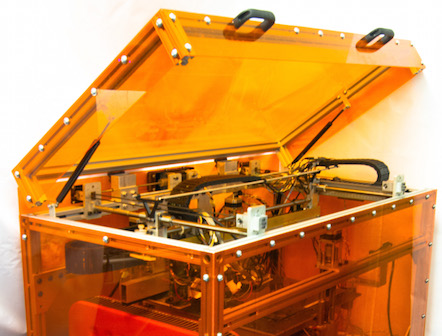 3D printing is great, assuming that all you need to do is print one material for one purpose, and that you’re okay with it taking a few tries. But the technology is still far behind where it could be in reliably producing a variety of useful objects, with no assembly required, at a cost that doesn’t make you want to poke your eyes out with a 3D-printed fork.

In recent years companies have been working to tackle some of these challenges with “multi-material” 3D printers that can fabricate many different functional items. Such printers, however, have traditionally been limited to three materials at a time, cost as much as $250,000 each, and still require a fair amount of human intervention.

But this week researchers at MIT’s Computer Science and Artificial Intelligence Lab (CSAIL) say that they’ve found a way to make a better, cheaper, more user-friendly printer. In a paper accepted at the SIGGRAPH computer-graphics conference, a CSAIL team presented a 3D printer that can print an unprecedented 10 different materials at once by using 3D-scanning techniques that save the user time, energy and money.

Delivering resolution at the level of 40 microns, or less than half the width of a human hair, the “MultiFab” system is the first 3D printer to use 3D-scanning techniques from machine-vision, which offers two key advantages over traditional 3D printing.

First, MultiFab can self-calibrate and self-correct, freeing users from having to do the fine-tuning themselves. For each layer of the design, the system’s feedback loop 3D-scans and detects errors and then generates so-called “correction masks.” This approach allows the use of inexpensive hardware while ensuring print accuracy.

Secondly, MultiFab gives users the ability to embed complex components like circuits and sensors directly onto the body of an object, meaning that it can produce a finished product, moving parts and all, in one fell swoop.

“The platform opens up new possibilities for manufacturing, giving researchers and hobbyists alike the power to create objects that have previously been difficult or even impossible to print.”says Javier Ramos, a research engineer at CSAIL who co-authored the paper with members of professor Wojciech Matusik’s Computational Fabrication Group.

The team has used MultiFab to print everything from smartphone cases to LED lenses, and envision an array of applications in consumer electronics, microsensing, medical imaging, and telecommunications, among other things. They plan to also experiment with embedding motors and actuators that would make it possible to 3D-print more advanced electronics, including potentially even robots.

Why multi-material printing is hard

There are many technical challenges to creating a printer like MultiFab. Different materials have to be printed in specific ways with regard to factors like pressure and temperature, and so printing something complex usually involves printing all of the individual pieces separately, and then having a person assemble them by hand.

But with MultiFab, you simply put the components into the platform, which automatically scans their 3D geometries and uses that information to print other objects around them. For example, you can put an iPhone right into the printer, and program the system to print a perfectly-sized case that is directly affixed onto the phone.

Other multi-material printers work via “extrusion” technologies, using syringes in much the same way that you would put frosting onto a cake. Such techniques, while sufficient for certain uses, often lead to low-resolution items that don’t look realistic.

MultiFab, meanwhile, mixes microscopic droplets of photopolymers together that are then sent through inkjet printheads similar to the ones you see in office printers. The computationally-intensive process, which involves crunching dozens of gigabytes of visual data at a time, can be much more easily scaled to larger objects and multiple materials.

Ramos says that he could imagine printers like MultiFab being used by researchers, manufacturers and consumers.

Companies could edit and finalize designs faster, allowing them to bring products to market sooner. Big-box stores that have already installed single-material 3D printers could graduate to multi-material ones, for use by casual hobbyists and small-business owners alike.

“Picture someone who sells electric wine-openers, but doesn’t have $7,000 to buy a printer like this. In the future they could walk into a FedEx with a design and print out batches of their finished product at a reasonable price,” says Ramos. “For me, a practical use like that would be the ultimate dream.”