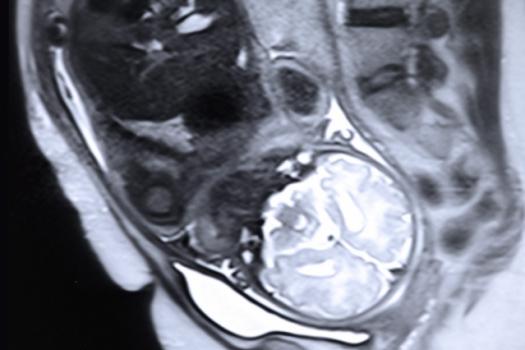 Researchers from MIT, Boston Children's Hospital, and Massachusetts General Hospital have joined forces in an ambitious new project to use magnetic resonance imaging (MRI) to evaluate the health of fetuses.

Typically, fetal development is monitored with ultrasound imaging, which is cheap and portable and can gauge blood flow through the placenta, the organ in the uterus that delivers nutrients to the fetus. But MRI could potentially measure the concentration of different chemicals in the placenta and in fetal organs, which may have more diagnostic value.

Earlier this year, in a project led by Ellen Grant’s group in the Fetal-Neonatal Neuroimaging and Developmental Science Center at Boston Children’s Hospital (BCH), members of the research team presented a paper showing that MRI measurements of oxygen absorption rates in the placenta can indicate placental disorders that might endanger the fetus. Grant is a professor of pediatrics and radiology at the Harvard Medical School (HMS).

And at the International Conference on Medical Image Computing and Computer Assisted Intervention this week, a team led by Polina Golland’s group at MIT’s Computer Science and Artificial Intelligence Laboratory presented a paper demonstrating a new algorithm for tracking organs through sequences of MRI scans, which will make MRI monitoring much more useful.

Much of Golland’s prior work has dealt with algorithmic analysis of MRI scans of the brain. “The question is, why can’t you just use everything that we’ve done in the last 25 years in the brain to apply in this case?” says Golland, a professor of electrical engineering and computer science. “And the answer is that for the brain, when the person is performing a particular task in the scanner, they’re lying still. And then after the fact, you can use algorithmic approaches to correct for very small motions. Inside the uterus, well, you can’t tell the mother not to breathe. And you can’t tell the baby not to kick.”

Frame by frame
“When you’re trying to understand whether it’s a healthy intrauterine environment, you look at fetal growth by doing measurements with ultrasound, and you look at the velocities of waveforms in the umbilical arteries,” says Grant. “But neither of those are direct measures of placental function. They’re downstream effects. Our goal is to come up with methods for assessing the spatiotemporal function of the placenta directly. If you really want to intervene, you want to intervene before the placenta fails.”

Grant leads the clinical arm of the project together with Lawrence Wald, a physicist at Massachusetts General Hospital and a professor of radiology at HMS. Elfar Adalsteinsson, an MIT professor of electrical engineering and computer science, is collaborating with colleagues at BCH to develop new MRI technologies for fetal imaging, and Golland’s group is in charge of developing software for interpreting the images.

An MRI image might consist of hundreds of two-dimensional cross sections of an anatomical region, stitched into a three-dimensional whole. Measuring chemical changes over time requires analyzing sequences of such three-dimensional representations — about 300, in the case of the new paper. The researchers refer to each MRI image in a series as a “frame,” analogous to frames of video.

The first step in localizing chemical changes to particular organs, of course, is identifying the organs. That’s where the researchers’ new algorithm comes in.

With MRI images of brain activity, it’s comparatively easy to determine which anatomical features in one frame correspond to which features in the next. The subject’s head is immobilized, and brain regions don’t change shape or location over the course of a scan. Algorithmically, the standard method for coordinating frames is to identify a region in the first frame and then map it separately onto each of the frames that follow.

With fetal MRIs, that won’t work, because the fetus may have moved dramatically between, say, frame one and frame 200. So Golland and her co-authors — including first author Ruizhi Liao, an MIT graduate student in electrical engineering and computer science; Grant; and Adalsteinsson — took a different approach.

On a roll
Their algorithm begins by finding a mathematical function that maps the pixels of the first frame onto those of the second; then it maps the mathematically transformed version of the first frame onto the third, and so on. The end result is a series of mathematical operations that describes the evolution of the scan as a whole. “The way to think about how this algorithm works is, it takes the baseline frame — for example, the first one — and it rolls it down the sequence,” Golland says.

Next, a human expert draws very precise boundaries around the elements of interest in the first frame — in this case, not just the placenta but the brain and liver as well. Those elements’ movements or deformations from frame to frame can then be calculated using the previously determined mathematical operations.

Hand-drawing organ boundaries — or “segmenting” an MRI scan — is a time-consuming process. But performing it only once is much less onerous than performing it 300 times.

In order to evaluate the accuracy of their algorithm, the researchers hand-segmented an additional five frames. “Two members of the team sat there for about a week and drew outlines,” Golland says. “It’s a very painful validation process, but you have to do it to believe the results.” The algorithm’s segmentations accorded very well with those performed by hand.

“One of the big problems in high-speed acquisition and MR [magnetic resonance] acquisition is definitely the incorporation of motion and trying to deal with motion issues,” says Sarang Joshi, a professor of bioengineering at the University of Utah. “Modeling and incorporating the deformation estimation in MR acquisition is a big challenge, and we have been working on it as well, and many other people have been working on it. So this is a really great step forward.”