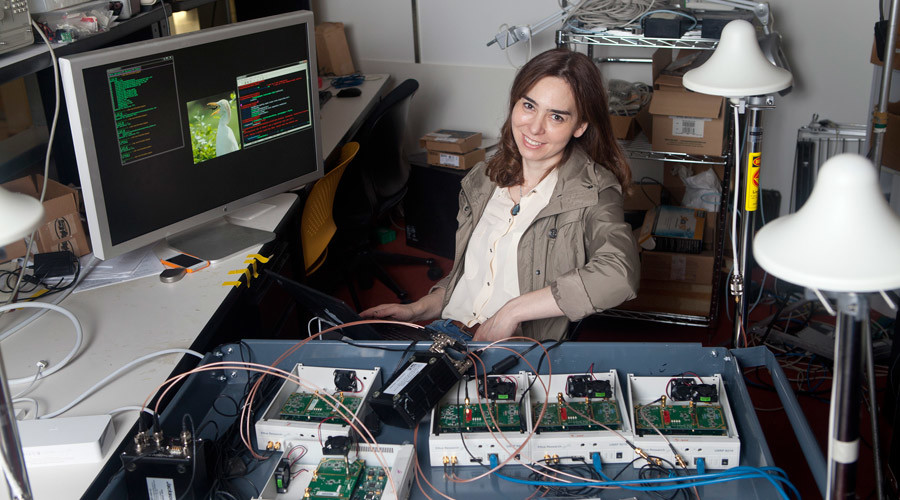 Dina Katabi, an MIT professor who created a wireless device that “sees through walls”, has won the Association for Computing Machinery’s (ACM) Prize in Computing for her significant contributions to wireless systems. The prestigious award comes with a $250,000 cash prize.

Katabi, who is cited by ACM as being “one of the most innovative researchers in the field of networking,” has spearheaded research in wireless systems for health-monitoring technologies. A principal investigator at MIT’s Computer Science and Artificial Intelligence Laboratory (CSAIL), Katabi has focused on systems that can better predict health outcomes in a non-invasive manner. She developed a device that analyzes the wireless signals in the environment to detect humans behind walls and measure metrics like movement, breathing rate and walking speed, which are especially important for monitoring the health of the elderly.

In addition to her research in human-sensing technologies, Katabi has pioneered research in wireless networks to improve the data rate and reliability of WiFi and cellular systems. Her designs and algorithms draw on advanced mathematical models to improve how data can be moved from one point to another in a given time. Her work has provided has provided mechanisms for combating interference and avoiding dead spots.

“Innovations that help facilitate communications across mobile networks address an important need,” says ACM President Vicki L. Hanson in a related press release. “Katabi’s work has contributed to a seamless increase in [mobile data] traffic, as well as the ever-increasing volumes of data that are shared over mobile systems. She is known for reimagining long-standing challenges in original ways.”

Katabi is the Andrew and Erna Viterbi Professor of Computer Science and Director of the Center for Wireless Networks and Mobile Computing at MIT. The ACM Prize is now among many honors she has received, including a MacArthur Fellowship and the ACM Grace Murray Hopper Award. She is also an ACM Fellow and was elected to the National Academy of Engineering.

“Dina has done visionary work in taking a communications technology like Wi-Fi and being able to turn it into a meaningful metric for measuring all sorts of important health information, from heart-rate and breathing to walking speed and sleep cycles,” says CSAIL Director Daniela Rus. “Her work has the potential to fundamentally transform the field of health-care, and all of us at CSAIL are so very proud of her for being recognized with this honor.”

The award will be presented at the ACM’s annual awards banquet on June 23, 2018 in San Francisco.