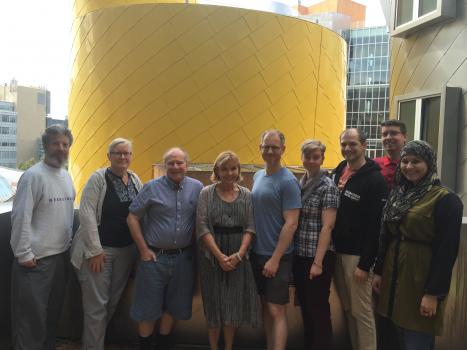 This week it was announced that Mass Technology Leadership Council (MassTLC) will present CSAIL principal investigator Hal Abelson’s team with the Distinguished Leadership Award for their work on the MIT App Inventor.

App Inventor is a cloud-based open-source tool that lets users of all skill levels create working apps via smartphones and tablets. It serves as educational platform for teaching computing in middle school and high school, aimed at creating excitement around computer science at younger ages.

The team has worked with various programs to solve many real-world problems, such as Technovation to help middle and high school aged girls address community challenges, and Coolthink, which is doing research aimed at including App Inventor in all Hong Kong primary schools.

The platform is also used by thousands of amateur programmers and hobbyists who make apps for themselves, friends and business-related projects.

“The MassTLC Education Foundation has worked closely with the MIT App Inventor team for years, making coding more accessible for kids through Technovation and other programs,” said MassTLC CEO Tom Hopcroft. “MIT App Inventor is having an impact well beyond Massachusetts, making coding accessible to everyone from U.S. Marines to refugees. They’ve lowered the technical barriers, enabling people around the globe to innovate, solve problems and capture new opportunities.”