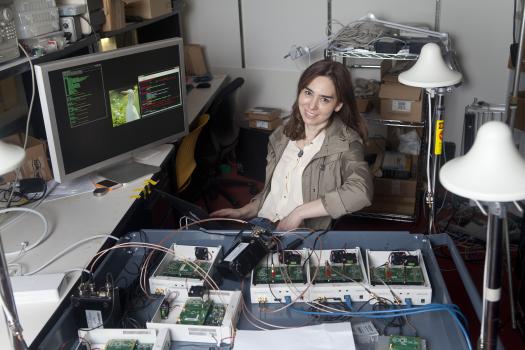 Congratulation to this year's "MacArthur geniuses"!

Below are a sampling of  CSAIL researchers who have received the honor, which include an unrestricted award of $625,000 that is paid over five years.

A 1998 winner, Berners-Lee is one of the foremost pioneers in the history of technology. In 1989 he invented the World Wide Web, as well as its various associated protocols, including HTTP, HTML, and URL.

He co-leads CSAIL's Decentralized Information Group, and founded and directs the World Wide Consortium (W3C) the forum for technical development of the Web. His current research is aimed at fighting for rights such as privacy, freedom and openness on the Web.

A 2003 winner, Demaine won the award at the age of 22 for his work fusing art, science, work and play.

He studies abstract geometry problems related to folding and bending that have practical applications in fields as diverse as manufacturing (sheet metal fabrication) and biology (protein-folding).

At age 17, he unfolded the secret behind a complicated geometry problem. Demaine and his collaborators proved mathematically that it is possible to create any conceivable straight-sided shape by folding a piece of paper and making a single scissor cut. This launched the field of computational origami, an interdisciplinary endeavor on the boundary of computer science and mathematics.

A 2013 winner, Katabi works at the intersection of computer science, electrical engineering and physics to improve the speed, reliability and security of data exchange.

“That intersection can enable new things that we couldn’t have thought of if we just focused on one of those things alone,” Katabi says. “How can you rethink your mobile applications if you have information about how the signal is going to propagate over the air and the wireless medium? How can you design your signals differently if you know what the application wants?”

The MacArthur Foundation cited Katabi, 42, for her “ability to translate long-recognized theoretical advances into practical solutions that could be deployed in the real world. Through her numerous contributions, Katabi has become a leader in accelerating our capacity to communicate high volumes of information securely without restricting mobility.”

A 2002 winner, CSAIL Director Rus was recognized for her work “building innovative devices ranging from abstract information processors to self-reconfiguring robots,” according to the MacArthur Foundation's press release.

Her research has focused on furthering the study of networked robotics and how machines can collaborate to achieve a common goal. Her group at the Distributed Robotics Lab has built robots that can bake cookies, swim, fly in swarms, and even dance with humans.

"In 10 or 15 years, I think that robots will be as commonplace as smartphones," Rus told the Boston Business Journal, "with personal robots that can help with everything from doing search-and-rescue operations to folding the laundry.