How badly do you want something? Babies can tell 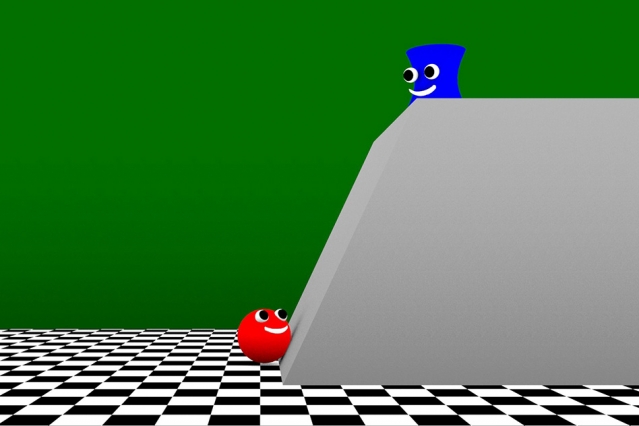 Babies as young as 10 months can assess how much someone values a particular goal by observing how hard they are willing to work to achieve it, according to a new study from MIT and Harvard University.

This ability requires integrating information about both the costs of obtaining a goal and the benefit gained by the person seeking it, suggesting that babies acquire very early an intuition about how people make decisions.

“Infants are far from experiencing the world as a ‘blooming, buzzing confusion,’” says lead author Shari Liu, referring to a description by philosopher and psychologist William James about a baby’s first experience of the world. “They interpret people's actions in terms of hidden variables, including the effort [people] expend in producing those actions, and also the value of the goals those actions achieve."

“This study is an important step in trying to understand the roots of common-sense understanding of other people’s actions. It shows quite strikingly that in some sense, the basic math that is at the heart of how economists think about rational choice is very intuitive to babies who don’t know math, don’t speak, and can barely understand a few words,” says Josh Tenenbaum, a professor in MIT’s Department of Brain and Cognitive Sciences, a core member of the joint MIT-Harvard Center for Brains, Minds and Machines (CBMM), and one of the paper’s authors.

Tenenbaum helped to direct the research team along with Elizabeth Spelke, a professor of psychology at Harvard University and CBMM core member, in whose lab the research was conducted. Liu, the paper’s lead author, is a graduate student at Harvard. CBMM postdoc Tomer Ullman is also an author of the paper, which appears in the Nov. 23 online edition of Science.

Previous research has shown that adults and older children can infer someone’s motivations by observing how much effort that person exerts toward obtaining a goal.

The Harvard/MIT team wanted to learn more about how and when this ability develops. Babies expect people to be consistent in their preferences and to be efficient in how they achieve their goals, previous studies have found. The question posed in this study was whether babies can combine what they know about a person’s goal and the effort required to obtain it, to calculate the value of that goal.

To answer that question, the researchers showed 10-month-old infants animated videos in which an “agent,” a cartoon character shaped like a bouncing ball, tries to reach a certain goal (another cartoon character). In one of the videos, the agent has to leap over walls of varying height to reach the goal. First, the babies saw the agent jump over a low wall and then refuse to jump over a medium-height wall. Next, the agent jumped over the medium-height wall to reach a different goal, but refused to jump over a high wall to reach that goal.

The babies were then shown a scene in which the agent could choose between the two goals, with no obstacles in the way. An adult or older child would assume the agent would choose the second goal, because the agent had worked harder to reach that goal in the video seen earlier. The researchers found that 10-month-olds also reached this conclusion: When the agent was shown choosing the first goal, infants looked at the scene longer, indicating that they were surprised by that outcome. (Length of looking time is commonly used to measure surprise in studies of infants.)

The researchers found the same results when babies watched the agents perform the same set of actions with two different types of effort: climbing ramps of varying incline and jumping across gaps of varying width.

“Across our experiments, we found that babies looked longer when the agent chose the thing it had exerted less effort for, showing that they infer the amount of value that agents place on goals from the amount of effort that they take toward these goals,” Liu says.

The findings suggest that infants are able to calculate how much another person values something based on how much effort they put into getting it.

“This paper is not the first to suggest that idea, but its novelty is that it shows this is true in much younger babies than anyone has seen. These are preverbal babies, who themselves are not actively doing very much, yet they appear to understand other people’s actions in this sophisticated, quantitative way,” says Tenenbaum, who is also affiliated with MIT’s Computer Science and Artificial Intelligence Laboratory.

Studies of infants can reveal deep commonalities in the ways that we think throughout our lives, suggests Spelke. “Abstract, interrelated concepts like cost and value — concepts at the center both of our intuitive psychology and of utility theory in philosophy and economics — may originate in an early-emerging system by which infants understand other people's actions,” she says.

The study shows, for the first time, that “preverbal infants can look at the world like economists,” says Gergely Csibra, a professor of cognitive science at Central European University in Hungary. “They do not simply calculate the costs and benefits of others’ actions (this had been demonstrated before), but relate these terms onto each other. In other words, they apply the well-known logic that all of us rely on when we try to assess someone’s preferences: The harder she tries to achieve something, the more valuable is the expected reward to her when she succeeds.”

Over the past 10 years, scientists have developed computer models that come close to replicating how adults and older children incorporate different types of input to infer other people’s goals, intentions, and beliefs. For this study, the researchers built on that work, especially work by Julian Jara-Ettinger PhD ’16, who studied similar questions in preschool-age children. The researchers developed a computer model that can predict what 10-month-old babies would infer about an agent’s goals after observing the agent’s actions. This new model also posits an ability to calculate “work” (or total force applied over a distance) as a measure of the cost of actions, which the researchers believe babies are able to do on some intuitive level.

Building this type of model is an important step toward developing artificial intelligence that replicates human behavior more accurately, the researchers say.

“We have to recognize that we’re very far from building AI systems that have anything like the common sense even of a 10-month-old,” Tenenbaum says. “But if we can understand in engineering terms the intuitive theories that even these young infants seem to have, that hopefully would be the basis for building machines that have more human-like intelligence.”

Still unanswered are the questions of exactly how and when these intuitive abilities arise in babies.

The researchers hope that studies of even younger babies, perhaps as young as 3 months old, and computational models of learning intuitive theories that the team is also developing, may help to shed light on these questions.

This project was funded by the National Science Foundation through the Center for Brains, Minds, and Machines, which is based at MIT’s McGovern Institute for Brain Research and led by MIT and Harvard.