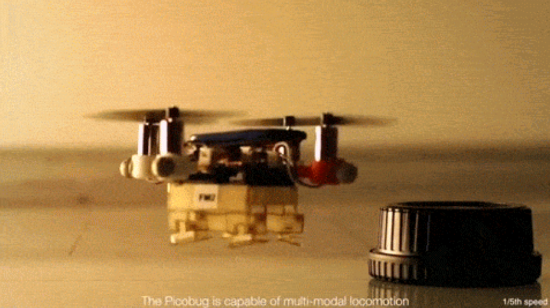 A team that includes CSAIL researchers has designed a “flying monkey” robot that walks, grasps, flies, and clocks in at less than 1/10th of a pound.

Modeled after the male stag beetle, the robot is part of a new class of robots capable of interacting with and modifying their surroundings, by using capabilities of legged and aerial robots.

Part of the platform uses one of the world’s smallest quadrotor aircraft (“the Dragonfly”) and is powered by a single motor. Crawling, flying, and grasping allows the flying monkey to perform complex tasks such as hopping over obstacles, crawling under or through small openings, and picking up small objects.

The paper will be presented at the 2016 International Conference on Robotics and Automation (ICRA) in May.

This research was supported by the National Science Foundation, the Army Research Laboratory, and the Wyss Institute for Biologically Inspired Research.