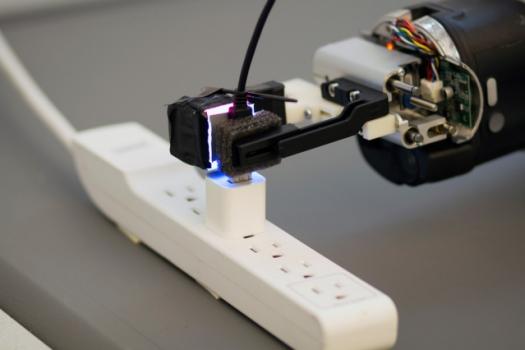 Researchers at CSAIL and Northeastern University have equipped a robot with a novel tactile sensor that lets it grasp a USB cable draped freely over a hook and insert it into a USB port.

The sensor is an adaptation of a technology called GelSight, which was developed by the lab of Professor (and CSAIL principal investigator) Edward Adelson, and first described in 2009. The new sensor isn’t as sensitive as the original GelSight sensor, which could resolve details on the micrometer scale. But it’s smaller — small enough to fit on a robot’s gripper — and its processing algorithm is faster, so it can give the robot feedback in real time.

Industrial robots are capable of remarkable precision when the objects they’re manipulating are perfectly positioned in advance. But according to Robert Platt, an assistant professor of computer science at Northeastern and the research team’s robotics expert, for a robot taking its bearings as it goes, this type of fine-grained manipulation is unprecedented.

“People have been trying to do this for a long time,” Platt says, “and they haven’t succeeded because the sensors they’re using aren’t accurate enough and don’t have enough information to localize the pose of the object that they’re holding.”