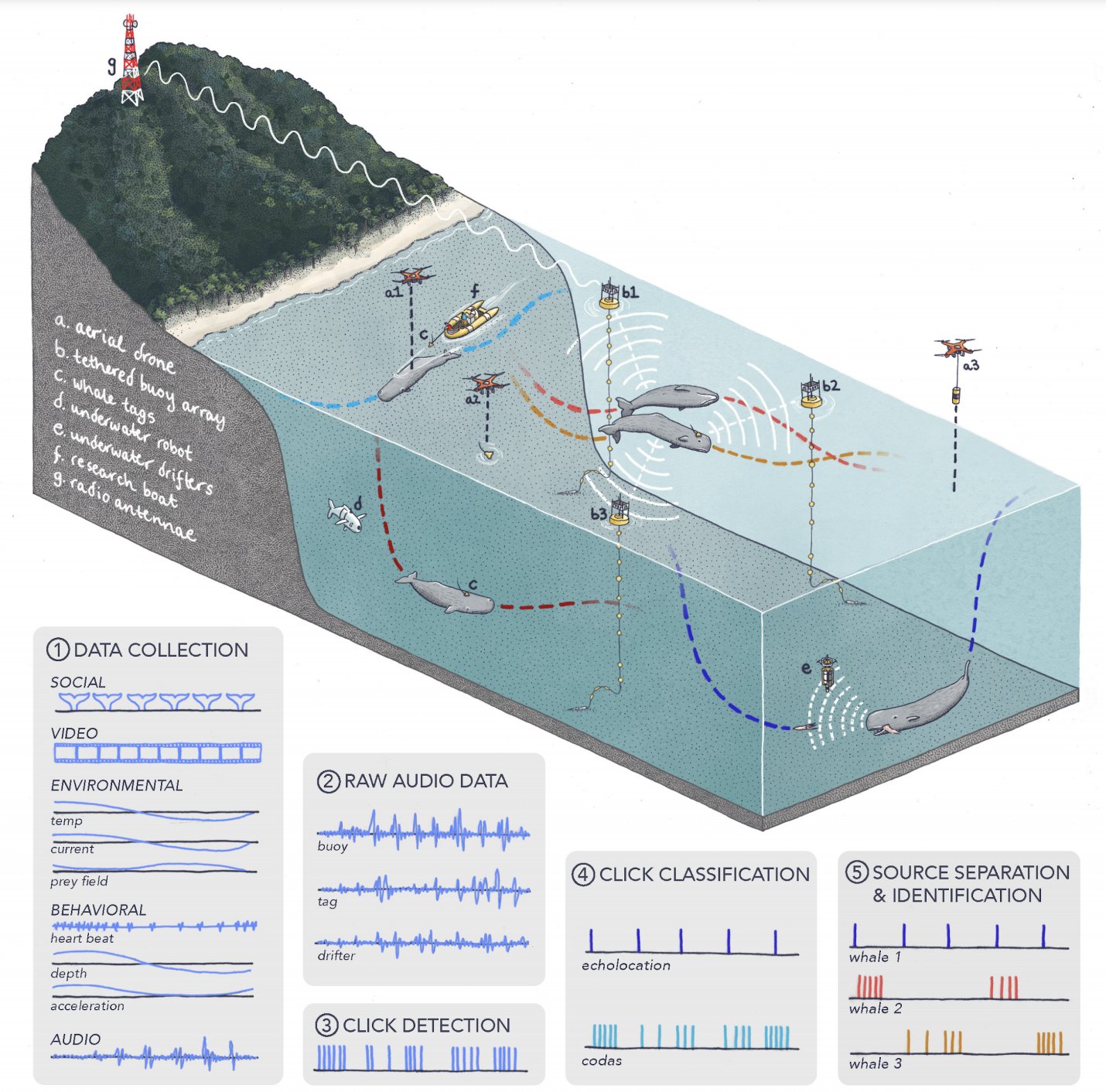 This week CSAIL joined the launch of a new research initiative aiming to apply advanced machine learning and robotics to listen to and translate the communication of sperm whales.

Dubbed Project CETI (Cetacean Translation Initiative), the five-year effort includes experts in linguistics, robotics, AI, and camera engineering from MIT CSAIL, Harvard, and the City University of New York. Project CETI is part of a collaborative effort that features TED,  the National Geographic Society, and the Government of Dominica.

A story in the National Geographic describes the project as “likely the largest interspecies communication effort in history.”

The team has already been at work building specialized video and audio recording devices that will capture and analyze millions of whale “clicks.” The goal is to understand the underlying architecture of whale communication, using contextual clues to uncover whether there is a consistent grammar and syntax to the animals’ sounds.

The project mirrors past efforts from CETI, including scientist Roger Payne’s work with humpback whales that sparked a global “Save the Whales” movement and ultimately led to the passing of the Marine Mammal Protection Act, which marked the end of large-scale whaling and saved several whale populations from extinction.

“Over the next five years, our team will intensively listen to sperm whales and seek to understand how they communicate in new ways” says project lead David Gruber, a biology professor at Baruch College at the City University of New York.

Sperm whales make some of the most powerful animal sounds on the planet, using a system of click patterns called ‘codas’. For the last 16 years the population of sperm whale families that lives off the Caribbean Island of Dominica has been closely followed by one of the team’s collaborators, the Dominica Sperm Whale Project.

“We’ve come to know these whales as brothers and sisters and as grandmothers, mothers, and babysitters, but our understanding of what they are saying to each other is limited,” says Dominica’s founder Shane Gero, whale biology lead for Project CETI.

For the first time in history, technological advances in engineering, artificial intelligence, and linguistics have made it possible to identify and translate deep structure in the communicative patterns of whales by building on this substantial baseline understanding of these whales’ behavior.

“We are thrilled by the opportunity to work on this preeminent team on understanding the language of sperm whales,” says CSAIL director Daniela Rus. “This project will give us greater insights into language, intelligence, and sustainability, and inspire the development of new underwater systems and machine learning algorithms.”

Project CETI has a commitment to open data and open source code which will engage and foster the global community. In tandem, a collaboration with the National Geographic Society’s Exploration Technology Lab will allow the team to deploy cutting edge cameras to see the whales’ world from a new perspective. By leveraging this technology, sperm whale communication will be contextualized, providing crucial insight into the behavior of this magnificent animal whilst vocalizing.

Project CETI (Cetacean Translation Initiative), a nonprofit organization, aims to apply advanced machine learning and non-invasive robotics to listen to and translate the communication of whales is funded by grants from Dalio Philanthropies and Ocean X; Sea Grape Foundation; Rosamund Zander and Hansjorg Wyss, and others, through The Audacious Project: a collaborative funding initiative housed at TED; as well as the National Geographic Society (No. NGS-72337T-20). Project CETI: EIN: 84-4630660; Project CETI (Dominica): Nonprofit No. 2021/C0053.