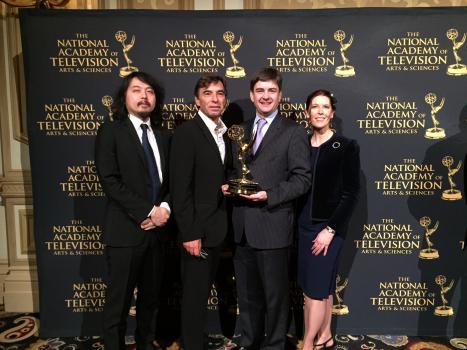 The Emmy recognizes W3C’s Timed Text Markup Language (TTML) standard aimed at people with disabilities, and particularly people who are deaf or hard of hearing, are addressed. Presented at the Bellagio Hotel in Las Vegas, the Emmy was in the category of “Standardization and Pioneering Development of Non-Live Broadband Captioning."

“W3C is thrilled to receive a 2016 Emmyin recognition of technologies that support an important part of our mission to bring the full potential of the World Wide Web to everyone, whatever their disability, culture, language, device or network infrastructure,” said W3C CEO Dr. Jeff Jaffe. “I would like to thank the National Academy of Television Arts & Sciences for their recognition of W3C, and I congratulate the members of the W3C Timed Text Working Group and the W3C Web Accessibility Initiative on this outstanding achievement.”

Since its founding in 1994 by Web inventor Sir Tim Berners-Lee, W3C has been committed to the principles of an open, interoperable and accessible Web for everyone on any device. Producers of video content for the Web worldwide use W3C’s TTML to author captions and subtitles that make online videos accessible to millions of people. For people who are deaf or hard of hearing, text captioning enables them to understand the audio portion of video content. Subtitles provide language translations for international audiences of the audio in video content.

Read more about the honor on the W3 website.