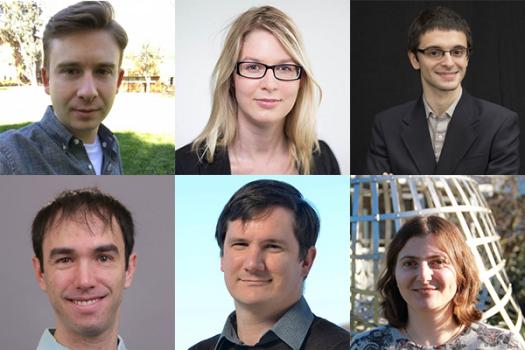 Adam Belay will join as an assistant professor in July 2017. Belay’s research area is operating systems and networking. Much of his work has focused on restructuring computer systems so that developers can more easily reach the full performance potential of hardware. Previously he worked on storage virtualization at VMware Inc. and contributed substantial power-management code to the Linux Kernel project.

Stefanie Mueller will join as an assistant professor in January 2017. In her research Mueller develops novel interactive hardware and software systems that advance personal fabrication technologies. Her work has been published at the Conference for Human Factors in Computing Systems (CHI), and User Interface Software and Technology (UIST), as well as covered widely in New Scientist, BBC, The Atlantic, and The Guardian. Mueller will head CSAIL's HCI engineering group, which works at the intersection of human-computer interaction, computer graphics, computer vision, and robotics.

Max Shulaker joined EECS and the Microsystems Technologies Laboratories (MTL) as an assistant professor in July. His research focuses on the broad area of nanosystems. His Novel Electronic Systems Group aims to understand and optimize multidisciplinary interactions across the entire computing stack — from low-level synthesis of nanomaterials, to fabrication processes and circuit design for emerging nanotechnologies, up to new architectures — to enable the next generation of high performance and energy-efficient computing systems.

David Sontag will join in January 2017 as an assistant professor as part of CSAIL and the Institute for Medical Engineering (IMES). His research interests are in machine learning and artificial intelligence with a recent focus on unsupervised learning, a problem of discovering hidden variables from data, and causal inference, which seeks to estimate the effect of interventions from observational data. As part of IMES, he will lead a research group that aims to transform health care through the use of machine learning. He has been an assistant professor in computer science and data science at New York University’s Courant Institute of Mathematical Sciences since 2011. Previously, he was a postdoc at Microsoft Research.

Ryan Williams will join MIT as an associate professor (with tenure) in January 2017. His research interests are in the theoretical design and analysis of efficient algorithms and in computational complexity theory, focusing mainly on new connections (and consequences) forged between algorithm design and logical circuit complexity. Following postdoctoral appointments at the Institute for Advanced Study (Princeton) and IBM Almaden, he was an assistant professor of computer science at Stanford for five years.

Virginia Vassilevska Williams will join as an associate professor in January 2017. Prior to joining MIT, she spent three and a half years as an assistant professor at Stanford. Her research interests are broadly in theoretical computer science, focusing on the design and analysis of algorithms and fine-grained complexity. Her work on matrix multiplication algorithms was covered by the press and is the most cited paper in algorithms and complexity in the last five years.