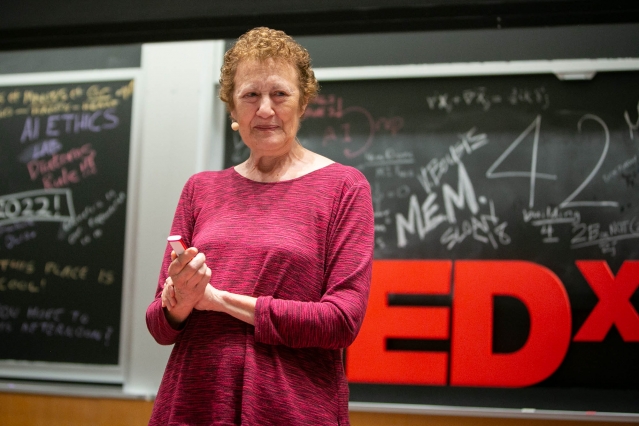 On Tuesday, May 28, MIT’s Computer Science and Artificial Intelligence Laboratory (CSAIL) hosted a special TEDx event featuring an all-female line-up of MIT scientists and researchers who discussed cutting-edge ideas in science and technology.

From Professor Nergis Mavalvala’s work on gravitational waves to Associate Provost Krystyn Van Vliet’s efforts to improve cell therapy, the afternoon was filled with energizing and historic success stories of women in STEM.

In an early talk, MIT Associate Professor Julie Shah touched on the much-discussed narrative of artificial intelligence and job displacement, and how that relates to her own work creating systems that she described as “being intentional about augmenting human capabilities.”She spoke about her efforts developing robots to help reduce the cognitive burden of overwhelmed workers, like the nurses on labor wards who have to make hundreds of split-second decisions for scheduling deliveries and C-sections.

“We can create a future where we don’t have robots who replace humans, but that help us accomplish what neither group can do alone,” said Shah.

CSAIL Director Daniela Rus, a professor of electrical engineering and computer science, spoke of how computer scientists can inspire the next generation of programmers by emphasizing the many possibilities that coding opens up.

“I like to say that those of us who know how to ... breathe life into things through programming have superpowers,” said Rus.

Throughout the day scientists showed off technologies that could fundamentally transform many industries, from Professor Dava Newman’s prototype Mars spacesuit to Associate Professor Vivienne Sze’s low-power processors for machine learning.

Judy Brewer, director of the World Wide Web Consortium’s Web Accessibility Initiative, discussed the ways in which the web has made the world a more connected place for those with disabilities — and yet, how important it is for the people who design digital technologies to be better about making them accessible.

“When the web became available, I could go and travel anywhere,” Brewer said. “There’s a general history of excluding people with disabilities, and then we go and design tech that perpetuates that exclusion. In my vision of the future everything is accessible, including the digital world.”

Liskov captivated the audience with her tales of the early days of computer programming. She was asked to learn Fortran on her first day of work in 1961 — having never written a line of code before.

“I didn’t have any training,” she said. “But then again, nobody did.”

In 1971 Liskov joined MIT, where she created the programming language CLU, which established the notion of “abstract data types” and laid the groundwork for languages like Java and C#. Many coders now take so-called “object-oriented programming” (OOP) for granted: She wryly reflected on how, after she won the Turing Award, one internet commenter looked at her contributions to data abstraction and pointed out that “everybody knows that, anyway.”

“It was a statement to how much the world has changed,” she said with a smile. “When I was doing that work decades earlier, nobody knew anything about [OOP].”

Other researchers built off of Liskov’s remarks in discussing the birth of big data and machine learning. Professor Ronitt Rubinfeld spoke about how computer scientists’ work in sublinear time algorithms has allowed them to better make sense of large amounts of data, while Hamsa Balakrishnan spoke about the ways in which algorithms can help systems engineers make air travel more efficient.

The event’s overarching theme was highlighting examples of female role models in fields where they’ve often been overlooked. Paula Hammond, head of MIT’s Department of Chemical Engineering, touted the fact that more than half of undergraduates in her department this year were women. Rus urged the women in the audience, many of whom were MIT students, to think about what role they might want to play in continuing to advance science in the coming years.

“To paraphrase our hometown hero, President John F. Kennedy, we need to prepare [women] to see both what technology can do for them — and what they can do for technology,” Rus said.