Cinematography on the fly 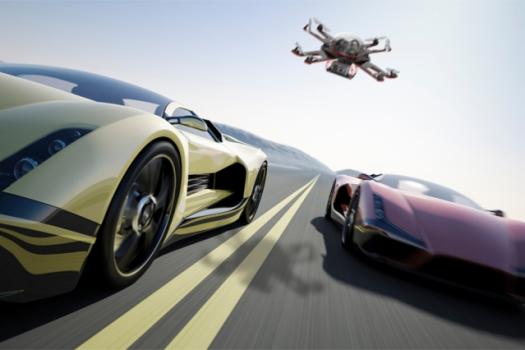 In recent years, a host of Hollywood blockbusters — including “The Fast and the Furious 7,” “Jurassic World,” and “The Wolf of Wall Street” — have included aerial tracking shots provided by drone helicopters outfitted with cameras.

Those shots required separate operators for the drones and the cameras, and careful planning to avoid collisions. But a team of researchers from MIT’s Computer Science and Artificial Intelligence Laboratory (CSAIL) and ETH Zurich hope to make drone cinematography more accessible, simple, and reliable.

At the International Conference on Robotics and Automation later this month, the researchers will present a system that allows a director to specify a shot’s framing — which figures or faces appear where, at what distance. Then, on the fly, it generates control signals for a camera-equipped autonomous drone, which preserve that framing as the actors move.

As long as the drone’s information about its environment is accurate, the system also guarantees that it won’t collide with either stationary or moving obstacles.

“There are other efforts to do autonomous filming with one drone,” says Daniela Rus, an Andrew and Erna Viterbi Professor of Electrical Engineering and Computer Science at MIT and a senior author on the new paper. "They can follow someone, but if the subject turns, say 180 degrees, the drone will end up showing the back of the subject. With our solution, if the subject turns 180 degrees, our drones are able to circle around and keep focus on the face. We are able to specify richer higher-level constraints for the drones. The drones then map the high-level specifications into control and we end up with greater levels of interaction between the drones and the subjects."

Joining Rus on the paper are Javier Alonso-Mora, who was a postdoc in her group when the work was done and is now an assistant professor of robotics at the Delft University of Technology; Tobias Nägeli, a graduate student at ETH Zurich and his advisor Otmar Hilliges, an assistant professor of computer science; and Alexander Domahidi, CTO of Embotech, an autonomous-systems company that spun out of ETH.

With the new system, the user can specify how much of the screen a face or figure should occupy, what part of the screen it should occupy, and what the subject’s orientation toward the camera should be — straight on, profile, three-quarter view from either side, or over the shoulder. Those parameters can be set separately for any number of subjects; in tests at MIT, the researchers used compositions involving up to three subjects.

Usually, the maintenance of the framing will be approximate. Unless the actors are extremely well-choreographed, the distances between them, the orientations of their bodies, and their distance from obstacles will vary, making it impossible to meet all constraints simultaneously. But the user can specify how the different factors should be weighed against each other. Preserving the actors’ relative locations onscreen, for instance, might be more important than maintaining a precise distance, or vice versa. The user can also assign a weight to minimize occlusion, ensuring that one actor doesn’t end up blocking another from the camera.

The key to the system, Alonso-Mora explains, is that it continuously estimates the velocities of all of the moving objects in the drone’s environment and projects their locations a second or two into the future. This buys it a little time to compute optimal flight trajectories and also ensures that it can get recover smoothly if the drone needs to take evasive action to avoid collision.

The system updates its position projections about 50 times a second. Usually, the updates will have little effect on the drone’s trajectory, but the frequent updates ensure that the system can handle sudden changes of velocity.

The researchers tested the system at CSAIL’s motion-capture studio, using a quadrotor (four-propeller) drone. The motion-capture system provided highly accurate position data about the subjects, the studio walls, and the drone itself.

In one set of experiments, the subjects actively tried to collide with the drone, marching briskly toward it as it attempted to keep them framed within the shot. In all such cases, it avoided collision and immediately tried to resume the prescribed framing. 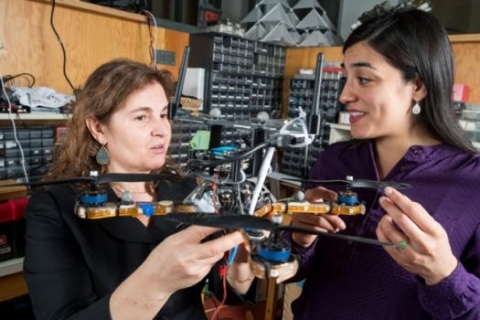 Distributed planning, communication, and control algorithms for autonomous robots make up a major area of research in computer science.