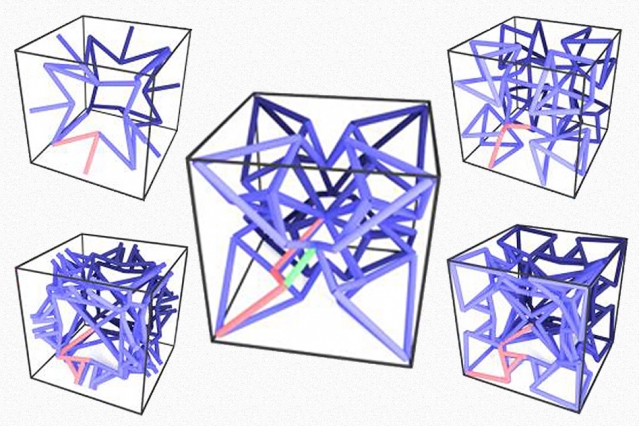 For decades, materials scientists have taken inspiration from the natural world. They’ll identify a biological material that has some desirable trait — such as the toughness of bones or conch shells — and reverse-engineer it. Then, once they’ve determined the material’s “microstructure,” they’ll try to approximate it in human-made materials.

Researchers at MIT’s Computer Science and Artificial Intelligence Laboratory have developed a new system that puts the design of microstructures on a much more secure empirical footing. With their system, designers numerically specify the properties they want their materials to have, and the system generates a microstructure that matches the specification.

The researchers have reported their results in Science Advances. In their paper, they describe using the system to produce microstructures with optimal trade-offs between three different mechanical properties. But according to associate professor of electrical engineering and computer science Wojciech Matusik, whose group developed the new system, the researchers’ approach could be adapted to any combination of properties.

Joining Matusik on the paper are first author Desai Chen, a graduate student in electrical engineering and computer science; and Mélina Skouras and Bo Zhu, both postdocs in Matusik’s group.

The new work builds on research reported last summer, in which the same quartet of researchers generated computer models of microstructures and used simulation software to score them according to measurements of three or four mechanical properties. Each score defines a point in a three- or four-dimensional space, and through a combination of sampling and local exploration, the researchers constructed a cloud of points, each of which corresponded to a specific microstructure.

Once the cloud was dense enough, the researchers computed a bounding surface that contained it. Points near the surface represented optimal trade-offs between the mechanical properties; for those points, it was impossible to increase the score on one property without lowering the score on another.

Next, the researchers use machine-learning techniques to determine correlations between specific values for the variables in the formulae and the measured properties of the resulting microstructures. This gives the system a rigorous way to translate back and forth between microstructures and their properties.

Every step in this process, Matusik emphasizes, is completely automated, including the measurement of similarities, the clustering, the skeleton extraction, the formula derivation, and the correlation of geometries and properties. As such, the approach would apply as well to any collection of microstructures evaluated according to any criteria.

By the same token, Matusik explains, the MIT researchers’ system could be used in conjunction with existing approaches to materials design. Besides taking inspiration from biological materials, he says, researchers will also attempt to design microstructures by hand. But either approach could be used as the starting point for the sort of principled exploration of design possibilities that the researchers’ system affords.

“You can throw this into the bucket for your sampler,” Matusik says. “So we guarantee that we are at least as good as anything else that has been done before.”

In the new paper, the researchers do report one aspect of their analysis that was not automated: the identification of the physical mechanisms that determine the microstructures’ properties. Once they had the skeletons of several different families of microstructures, they could determine how those skeletons would respond to physical forces applied at different angles and locations.

But even this analysis is subject to automation, Chen says. The simulation software that determines the microstructures’ properties can also identify the structural elements that deform most under physical pressure, a good indication that they play an important functional role.