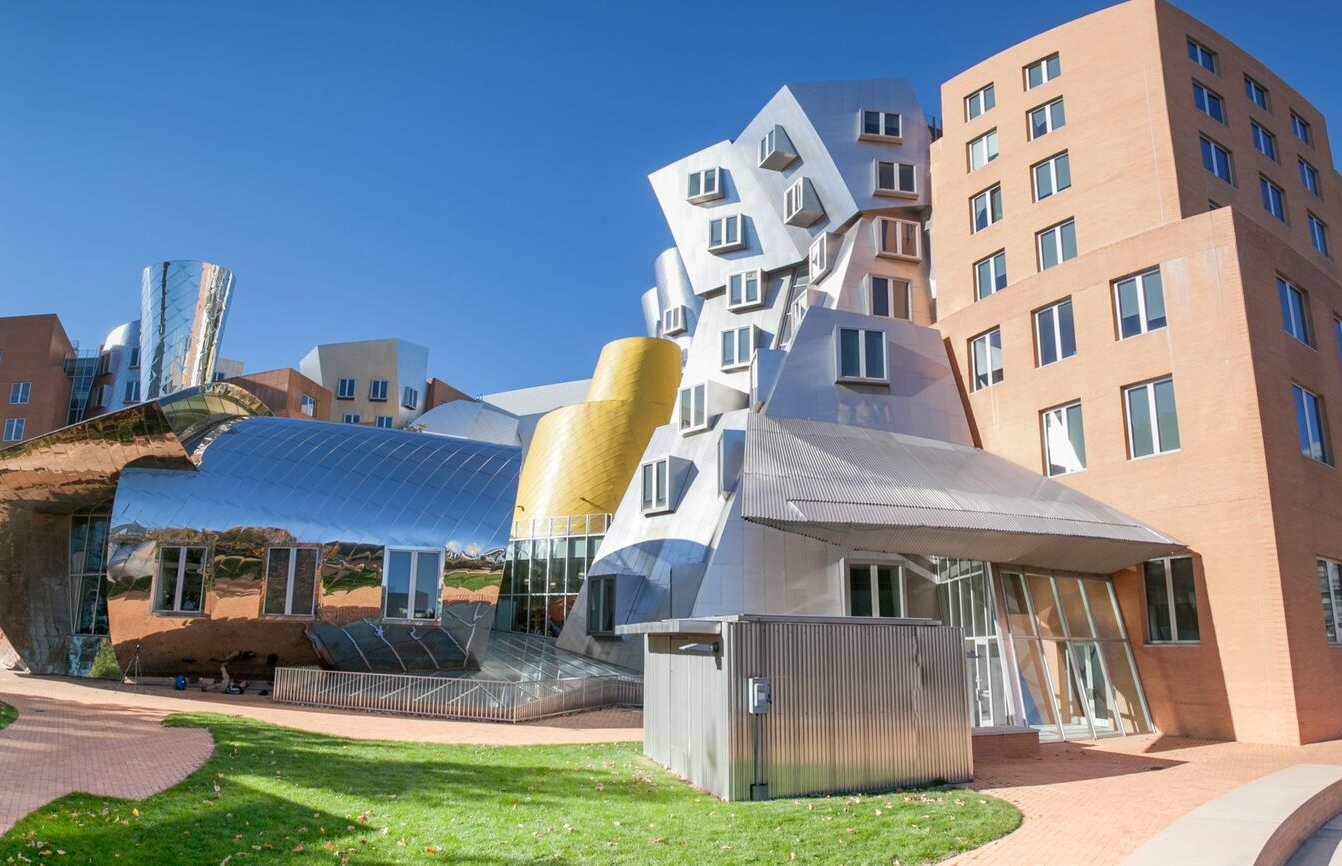 Welcome to the Stata Center

The Stata Center, a Frank Gehry architectural masterpiece, is home to the Computer Science and Artificial Intelligence Laboratory (CSAIL) and is located at 32 Vassar Street in Cambridge, Massachusetts, on the corner of Vassar and Main Street.

There are two entrances to Stata on Vassar Street, one at the "Gates" end (Main Street side) and one at the "Dreyfoos" end (Massachusetts Avenue side). If you are on the Dreyfoos side of the building, all the rooms will start with D, on the Gates side they start with G.

Room numbers are formatted as follows: building-tower-floor, and the room number starts with the floor the room is on. For example, 32-G699 would indicate the Stata Center (32), G for Gates, and the sixth floor (6), in room 699.

Subway: Take the Red Line to the Kendall/MIT Station (cost is $2.00 with a CharlieTicket and $1.70 with a CharlieCard). When you exit the T, walk Northwest, up Main Street (you will pass the MIT Coop and Legal Seafoods). When you come to the second intersection (Vassar St.), CSAIL will be in the building to your left.

Bus: The #1 (Dudley bus) stops at MIT on Massachusetts Avenue. The MIT stop is at a large crosswalk with a stop light. On one side of the street are steps leading up to large Ionic columns and the Small Dome of MIT with the Stratton Student Center (Building W20) and Kresge Oval (an open, grass-covered area) on the other side of the street. To get to the CSAIL, walk North (so that the steps are on your right) on Massachusetts. Avenue take a right at the first intersection (Vassar Street). Walk until you see the very unique building on your right at the corner of the next major intersection (Main Street).

More detailed public transportation maps and schedules are available from the MBTA.

Taxi: Taxi fare from the airport is about $25-$30. (Lyft/Uber will usually cost $15-20.) Under normal traffic conditions the ride will take about 25 minutes.

Subway: From any terminal at Logan airport, take the Silver Line bus to South Station. Go downstairs and take the Red Line to Kendall/MIT (take the outbound train toward Alewife). Under normal conditions the ride will take about 30 minutes. From the T stop, follow the directions above.

Car: The drive from Logan Airport can be rather nasty, depending on traffic conditions. Take the Sumner Tunnel exit from the airport (not the Ted Williams Tunnel) and follow the signs toward Boston via the Sumner Tunnel. The tunnel toll is $3. As you exit the tunnel, take the ramp onto the expressway (I-93 North). Take the second exit, marked 'Storrow Drive West'. Immediately take the right fork of the road to a stoplight. Turn left, then immediately turn right and drive over the Charles River on the Longfellow Bridge. At the second traffic light after the river, take a left onto Ames Street and then a right onto Main Street. CSAIL will be on your left in the building at the corner of Main and Vassar Street.

Take Exit 26, and follow the signs to Back Bay along Storrow Drive West, approximately 1.5 miles, to the exit for Route 2A. The exit will be on the left, just before the Harvard Bridge (more appropriately called the Massachusetts Avenue Bridge). The Charles River will be on your right. As you cross the Harvard Bridge, you will be looking at MIT. Continue 1 block on Mass. Ave., until you reach Vassar St. Take a Right on Vassar St. CSAIL is on your right in the building at the corner of Vassar and Main.

Take the I-93 Exit and follow the directions listed above.

From the Massachusetts Turnpike (I-90) (West):

Follow I-90 East to the Cambridge/Brighton exit (Exit 18). Following the signs to Cambridge (down the ramp to the right, then straight), cross the River Street Bridge, and continue straight about 1 mile to Central Square. Turn right onto Massachusetts Avenue and follow Massachusetts Avenue for about a half mile. If you cross the river again, you have gone too far. Bear left onto Main Street at the sculpture park. Follow Main Street for about a 1/2 mile to our building at the corner of Vassar Street.

Parking in Cambridge can be difficult. There are some metered spots on the street and public parking lots near campus.